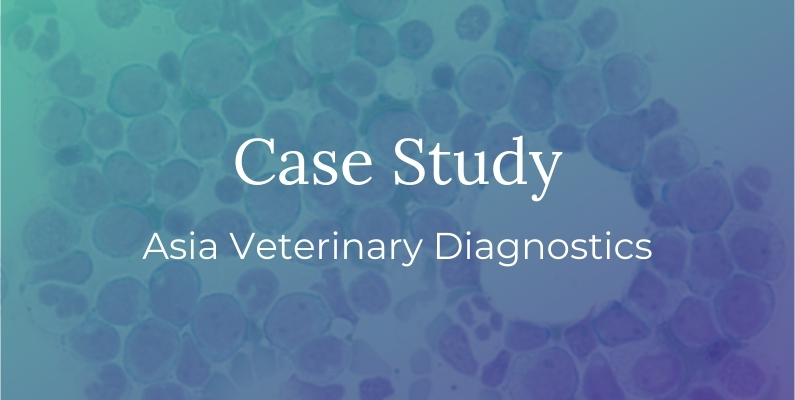 A 5-year-old neutered female chihuahua was presented for an interdigital mass (between digits II and III) of the right hind paw. The mass was red and raised, measured 0.3 cm diameter, was fairly well demarcated and non-pruritic. Very mild erythema was noted in the surrounding tissues and was attributed to licking. The duration was not certain, but the mass was noticed 2 weeks prior to presentation. FNA aspirates were performed.

High-power magnification (bar= 20µm). Note the presence of several large koilocyte-like cells. Their shape varies from slightly elongate (A) to round (B) and angular (C). The cytoplasm has a typical bright pink granular appearance. Occasional multiple small vacuoles can be present (A). The paracentral nucleus is large and contains a dense chromatin material. There is a subtle perinuclear clearing (B) that could be compatible with the halo like structures described.

2. Several large (40-60µm) variably shaped (angular, polygonal, rounded or fusiform structures), with well-defined borders, were present. They contained a bright pink fibrillar to granular cytoplasm. Occasional cells also contained abundant small clear vacuoles. A large paracental nucleus was present with benign condensed basophilic content. These structures are squamous cells. They have been named ‘’koilocytes’’ or koilocyte-like cells. Their nuclear to cytoplasmic ratio is low. It is believed that the pink material within the cytoplasm and vacuoles are the result of keratin production.

3. This cytology was compatible with a benign keratinized lesion and the presence of numerous koilocyte-like cells was strongly supportive of a diagnosis of papilloma despite low cellularity.

The term koilocyte in veterinary cytology is used when squamous keratinized cells display the following features: (1) a variably smooth shape and slightly larger size, (2) an abundant finely granular or fibrillar bright pink cytoplasm,(3) the presence of a mature condensed and large nucleus mostly paracentral, and (4) the presence of an infrequent perinuclear halo1. The term ‘koilocyte-like cell’ may be preferred since koilocyte in human cytopathology is specifically related to the papilloma virus infection2. Such cells are routinely observed on human cervical cytology in case of papilloma virus infection (with a Papanicolaou stain). The presence of intracytoplasmic vacuoles displacing the nucleus and forming a perinuclear halo is also a key feature indicating viral-induced cytopathic changes (including cellular hypertrophy).

There have been several reports or communications about the meaning of koilocytes and koilocyte-like cells in veterinary cytology1,3. Although very supportive of a diagnosis of papilloma in dogs, histopathological evaluation should be performed in such instances to confirm this tentative cytological diagnosis. The observation of intranuclear inclusions on histopathology further confirms a viral aetiology. A classification of papilloma can be provided with histopathology and includes three variants of cutaneous papillomas and the inverted cutaneous papilloma4. This latter subtype is an uncommon diagnosis, but forelimbs and abdomen Appear to be the most reported locations in dogs. It is also a slow-growing mass, usually well demarcated, measuring up to 2 cm in diameter. An uncommon form of interdigital papilloma has been reported in greyhound dogs5. Most viral papillomas tend to spontaneously regress over a year or so. Surgical removal is also usually curative.