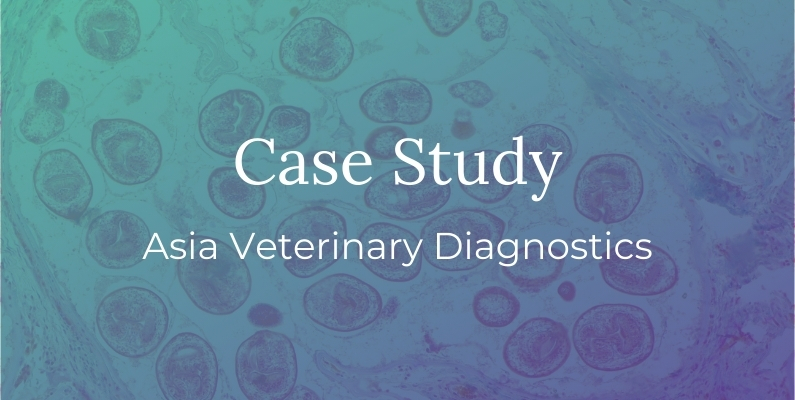 A 14-year-old neutered female cross-bred dog was presented with a 2 to 3 cm mass located on the left thorax. The mass was subcutaneous and appeared to be attached to the underlying ribs. The duration was unknown at the time of presentation. FNA aspirates were performed.

B – Higher magnification of the red square (bar= 100µm). A large aggregate of cells is present, embedded in an abundant bright pink matrix. Scattered individual cells with a round shape are also depicted.

High-power magnification (A: bar= 50µm; B and C: bar= 20µm). Note the presence of the bright pink matrix (A and B). The population of interest is composed of round-shaped cells with ill-defined contours. They are disposed individually (C), in loose sheets (A) or in dense loosely cohesive clusters (B). Anisocytosis and aniskaryosis are moderate (2-3 fold; see (A)). The nucleoli are prominent; they vary in size and number. A few mitotic figures are present (red arrow).

1. Depicted on Image 1 (A and B) is an excellent quality smear. The background is markedly haemodiluted and there is high cellularity.  Several dense clusters of cells are present and they appear to be embedded in an abundant bright pink material. 2/Several dense, loosely cohesive aggregates are present (Images 1 A-B and Image

2. Individual cells are also present (Image 2 C) as well as loosely cohesive sheets of cells (Image 2 A). The cells have a round or oval shape with ill-defined borders (Images 2 A, B and C). They measure between 15 and 40 mm (moderate anisocytosis). The N/C ratio is high.The cytoplasm is pale blue and contains occasional small clear vacuoles (Image 2 B). Rarely, intracytoplasmic fine pink granules are present (not depicted). The nucleus has a round to oval shape and contains  granular chromatin with prominent small nucleoli, of variable sizes and in variable number (Image 2 B). There is moderate anisokaryosis. Several mitotic figures (Image 2, red arrow) are present. Occasional binucleated cells are present (Image 2 A). A few scattered macrophages were also present (not depicted). Taken together, the morphological features are compatible with a mesenchymal population displaying several atypias / malignant criteria.

3. An abundant bright pink matrix (Image 1 and 2) is also present around or within the clusters (Images 2 and 3). This matrix is most compatible with chondroid. This cytology was compatible with a sarcoma, while the abundant bright pink matrix was typical of and most indicative of a chondrosarcoma. Unfortunately the tumour grew quite rapidly and the dog was euthanized shortly after when a CT scan showed that the mass was invading deep into the chest cavity.Histological evaluation of the mass was not performed. Another type of sarcoma (such as osteosarcoma) cannot be excluded completely and the evaluation of the entire mass would have been ideal. A recent study comparing the accuracy of cytological evaluation and histological biopsies in the diagnosis of canine bone lesions1 has emphasized the accuracy of cytology. The accuracy of cytology issimilar to histology (read ‘’biopsies’’ as opposed to the evaluation of the whole mass). Best results are obtained when the submitted slides are of adequate/good quality. This stresses  the importance of good quality cytology samples. Poorly cellular cytology slides are the main source of error. These results are encouraging as FNA and cytological evaluation have several advantages: timeliness, ease of performance and decreased cost and discomfort.

Canine chondrosarcoma occurs in the nasal cavity, ribs, long bones, pelvis, extraskeletal sites, vertebrae, facial bones, digits and os penis3. The nasal cavity is the most common site in dogs. Chondrosarcoma is generally considered to be slow to metastasize with the tumour location being a main prognostic factor. When compared to osteosarcoma, curative surgical removal of an accessible chondrosarcoma (such as one arising from the ribs) is more likely2 .The rapid worsening of the clinical condition in the present case may have been secondary to an aggressive tumour type or advanced disease at the time of diagnosis.