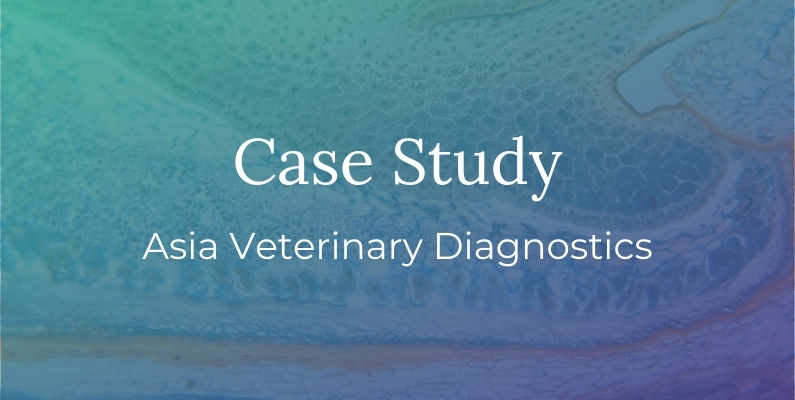 A 7-year-old crossbred dog, living in Hong Kong, was presented with unilateral epistaxis, with no response to medication. A CT scan revealed a small foreign body-associated lesion in the nasal cavity. At rhinoscopy, no obvious foreign body or mass was detected. A biopsy of the nasal mucosa was performed and sent for histopathology.

Histopathology of the samples of nasal mucosa revealed the process to be most likely of thromboembolic nature, resulting in extensive submucosal haemorrhage. Admixed with free blood clots were nematode larvae consistent with microfilaria.

Higher magnification of a microfilaria larvum

1. In dogs, various species of Dirofilaria have been reported. Dogs are the main reservoirs of immitis and D. repens. Cats may also be infected by D. repens or D. Immitis; however, cats are rarely considered to be reservoirs since microfilaraemia is rare in cats, but they can still can display clinical signs. The intermediate hosts are mosquitoes, predominantly of the genera Aedes, Culex, or Anopheles.

3. In dogs, adult immitis worms live in the pulmonary arteries and right chambers of the heart, but they can develop in various other arteries and veins, and have been reported from a variety of unusual sites, including the eye and brain.

4. Occult dirofilariasis, resulting from infection without microfilaraemia, occurs in 10-67% of infected dogs. Clinical diagnosis of occult dirofilariasis then rests on the findings of the indirect fluorescent antibody test, antigen detection tests, and cardiopulmonary imaging.

5. Heartworm disease is usually seen in dogs that are older than 5 years and have had continuous or multiple infections. The clinical signs are usually those of cardiovascular dysfunction, such as cough, dyspnoea, ascites and lethargy, which may progress to congestive heart failure. Right-sided heart failure develops as a consequence of pulmonary hypertension. Severe pulmonary arterial disease often results in chronic or low-grade disseminated intravascular coagulation, and hence thrombocytopenia and haemoglobinuria. Epistaxis is not frequently described, but can also be present in dogs resulting from peripheral thromboembolism in the presence of microfilaraemia. Renal failure is also a possible outcome resulting from an immune-mediated glomerulonephritis. Aberrant migration of adult heartworms into the systemic arterial circulation, a rare event, results in thromboembolism and hence signs such as hindlimb lameness and interdigital ischaemic necrosis. Renal failure is a possible outcome.

6. Vena cava syndrome (venae cavae syndrome, liver failure syndrome) is a variant of heartworm disease seen usually in young dogs in which large numbers of adult worms (100+) fill the right atrium and venae cavae. The syndrome is characterized by sudden onset of weakness, anorexia, bilirubinuria, haemoglobinuria, azotaemia and anaemia. The shock occurs because of obstruction and decreased venous return.

7. Dirofilariosis in cats usually causes cough and dyspnoea, but may also cause vomiting, neurological signs, and malaise; sudden death is another possible outcome. Vena cava syndrome also occurs in cats, and, if untreated, has a poor prognosis and high mortality rate.